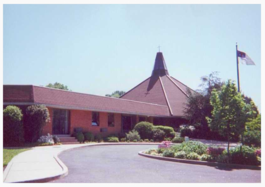 ​​​     It all started on August 1, 1961, when Pastor Kenneth W. Zimmerman came as mission developer called by the board of American Missions. The First Worship Service was held at the Killen-Miles American Legion Post on Pennell Road (now Yarnell's) on October 1, 1961 with 137 in attendance.  Church School began 2 weeks later attended by 116.  On Charter Sunday, January 14, 1962, 79 persons signed the Charter Membership Roll. Then on March 18, 1962, at a Service of Organization 143 charter members were received. We were received officially as a congregation of the Eastern Pennsylvania Synod of the Lutheran Church of America in May, 1962, and Pastor Zimmerman was instilled as the first Pastor in June.

As time progressed, there was a need for a House of God and so a Capital Funds Campaign was begun on November 8, 1962 - and on June 14, 1964, ground was broken for what is now the Fellowship Hall and classrooms. The first Church Service in the new building was on December 29, 1964.  The Rev. Thomas H. Reinsel was installed as our second Pastor on June 12, 1966.  He served St. Timothy's until 1969, when the Rev. Edwin L. Druckenmiller was installed as our third pastor. The Rev. Steven Tochterman accepted our official call and was installed on August 1, 1973

Our congregation had grown to over 400 contributing and communing members and we were literally bursting at the seams when our second Capital Funds Campaign was begun in1977.  Dedication of our sanctuary and offices addition was on December 16, 1979.  On July1, 1984, Pastor Steven Boughter was installed as our fifth pastor.  Since 1984 St. Timothy's has received over 200 members and our membership total is now close to 600. To add to the enhancement and beauty of worship a handbell choir was started. A Stephen Ministry program was begun as a way of caring for members in the church through lay counseling. Our Social Ministry of the congregation aids more and more needy families every year and a monthly feeding of the homeless in Upper Darby was begun. In addition, St. Timothy's has sponsored 10 ELCA seminary interns, added an Alpha program, numerous adult education opportunities, a women's fellowship group, supported mission congregations and added a contemporary worship service.

We have been richly blessed by God's grace, the generous support of our members, and strong lay leadership in Church Council and our committees. We look forward to as yet unseen opportunities to serve Jesus Christ.